Now I will try to show you, how to generate a specification for your own requirements.

To start it, you select the almost obvious "Define Specification" button: 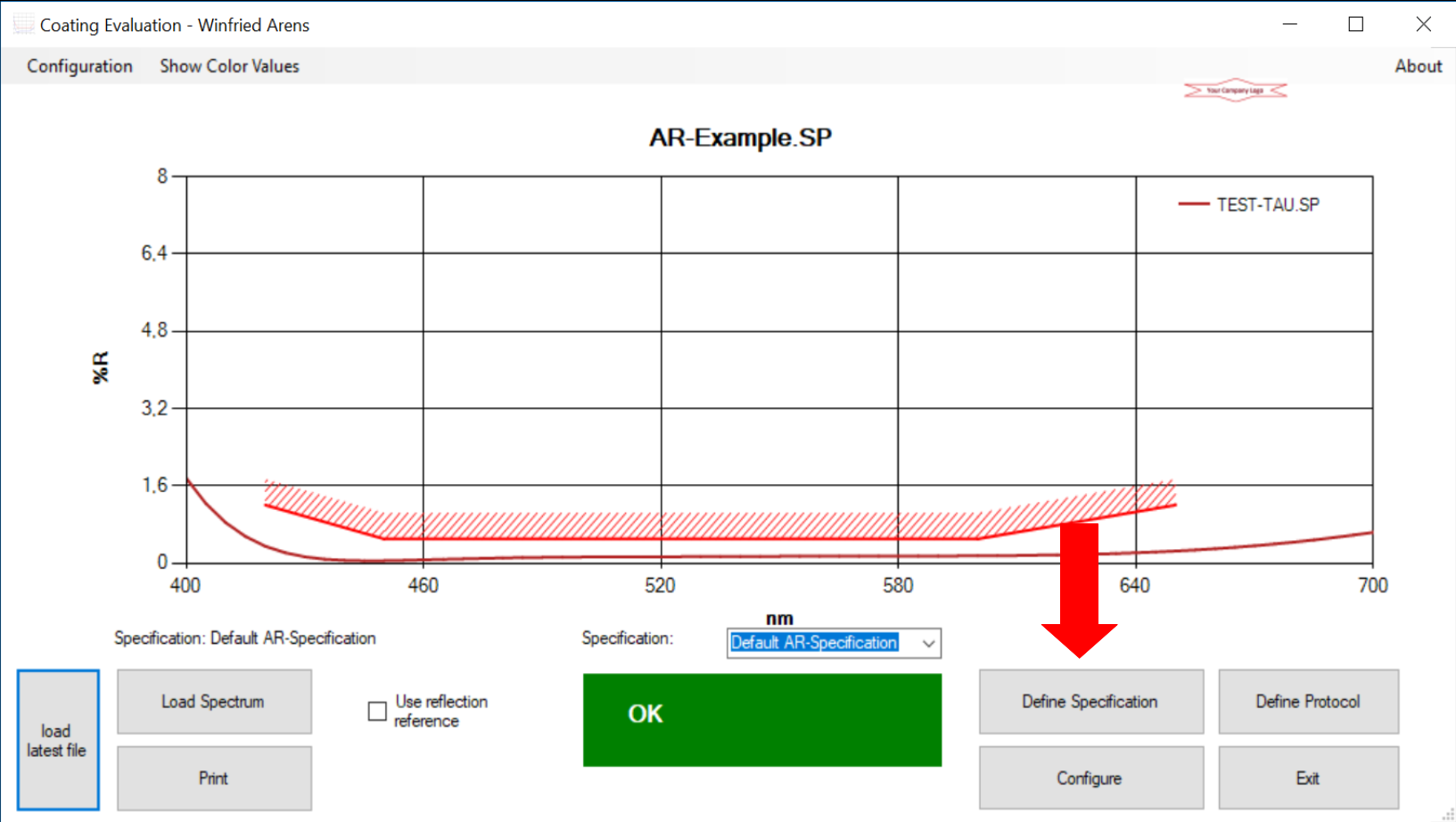 Then the essential dialog for generating and defining specifications appears: 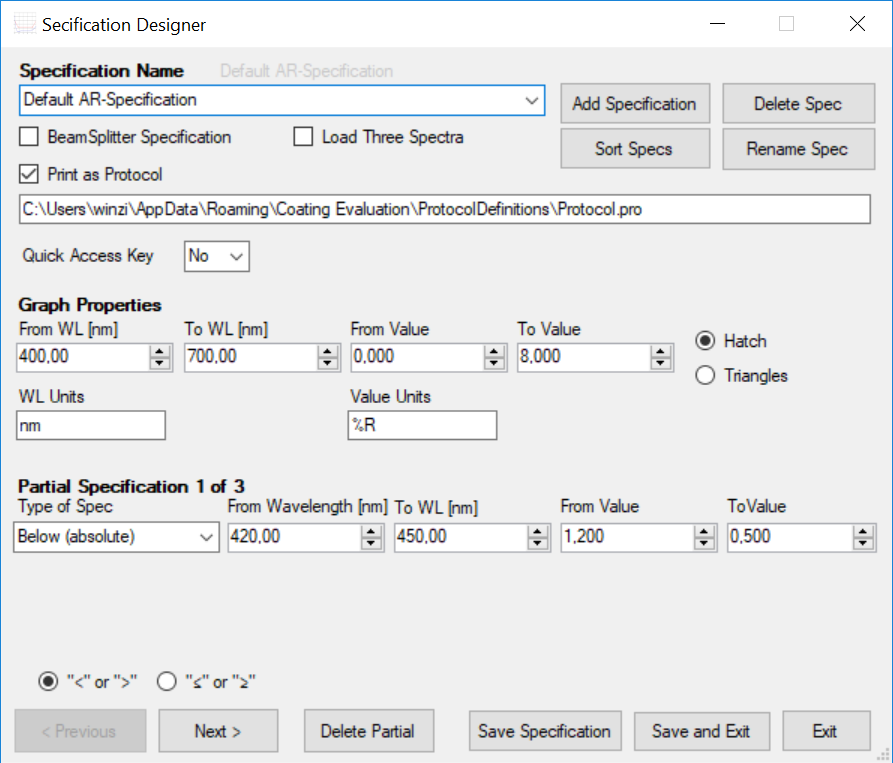 Starting at the top of the dialog, there is a drop down select box, where you can select between the existing specifications.

When you press "OK" now a new specification will have been generated.

Now let's go through the dialog step by step. There are three check boxes right under the specification name:

The first one "Beam Splitter Specification" allows when checked to load two spectra to specify the behaviour of a beam splitter (e.g. transmission and reflection). Both specifications can be defined separately. If it is selected the "Load three spectra" will change into "Polarizing Beamsplitter". When the latter is also selected, than specifications can be given for s-pol, p-pol and average (that is calculated as the arithmetic mean of s-pol and p-pol spectrum). Both spectra need to be measured with the same parameters regarding wavelength range, step width and number of measurement points per wavelength.

The second check box "load three spectra" also allows to load three spectral files and to specify their requirements separately. This might be good for metallic beam splitters, where you want to give specifications for transmission, reflection and absorption.

The third check box "Print as Protocol" changes the behaviour when printing. If it is checkd, a new textfield will appear giving the path to a protocol definition file:

When you click into this text-box, a file selection dialog comes up letting you select a protocol definition file ("*.pro"). How these are defined and what they can do is the topic of another HowTo.

Going further down in the dialog we find a select box and another check-box:

With the "Quick Access Key" select box, you can select a function key (the F1 to F12 keys at the top of the keyboard), that can be connected with this specification, so by pressing the Fx-Key you can select often used specifications with a single keystroke.

If the "Evaluate Transmission Value as Optical Density" checkbox is selected, the software will assume that it reads in transmission values and calculates OD values from these measured values. It is in the responsibility of the user to not load files that physically don't make sense. It was necessary to implement this feature, because some spectrometers save transmission values, even if the measurement software shows optical density. It may come in handy, if you want to know or specify optical density and you only have transmission data available.

The next things to ba adjusted are the properties of the graph showing your curves:

In the upper row you can adjust the extension of the graph in the main program window in x and y. Below that you can insert the units printed at the axes of the graph. Its the users responsibility not to print "%T" on a reflection measurement. Unfortunately - depending on the instrument and its software - some spectrometer files do not contain a correct indication on what type of measurement really is in the file. The other possible situation is that the you have used an insert for a spectrometer and have measured something in transmission mode, so your instrument was not "aware" of the real measurement taken, but you want it plotted correctly.

On the right, you can select between Hatch ad Triangle representation of the specification limits - the hatch version is only for the "simpler" specifications and is no loger in the examples given it the newest ISO 9211-2.

Anyhow, as you see these changes life, it should not be to hard to do the right selections.

Finally we get to the specification itself:

As a first piece of text it says "Partial specification x of y" - this is important for the concept:

What might be irrritating is the "From Value" and "To Value". This is for absolute specifications to allow "Tilted limit curves" an example is given in the "Default AR-Specification" made on first installation of the software. As you can see life what happens in the graph window, you can play around with the numbers a little and get a feeling.

In case you added a partial specification too much, you can get rid of it by "Delete Partial".

So it makes a (severe) difference, if the specification in the drawing says "≥" or if it says ">".

For specifications that can be expressed by a single value (like average transmission over a certain range) you can check "Print Value", what adds the actual value in the protocoll, if printing of the specification is activated there. But this is the topic of yet another HowTo.